Governor Ducey To Ukraine: We Stand With You

9,000 Pounds Of Surplus Equipment To Be Sent To Ukraine

PHOENIX — Governor Doug Ducey today visited the Arizona Department of Emergency and Military Affairs to send off 9,000 pounds of equipment and supplies to the freedom fighters of Ukraine.

“Arizona stands with Ukraine. Everyday citizens are risking their lives, fighting for their freedom, and deserve all the assistance we can give them,” said Governor Ducey. “These surplus bullet proof vests and armor will help as they defend their country from Vladimir Putin.”

The equipment was donated by 11 local, county, state and tribal law enforcement agencies. It includes 874 bullet proof vests, 77 helmets, miscellaneous tactical clothing, footwear, pads and shields. The 17 pallets of equipment will be transported to Ukraine by the Ukrainian Relief Group and are anticipated to be delivered in the next two weeks.

"Our team coordinated with county and tribal emergency managers to collect law enforcement donations," said Allen Clark, director of the Division of Emergency Management within the Arizona Department of Emergency and Military Affairs. "The emergency response community is proud to support Ukraine." 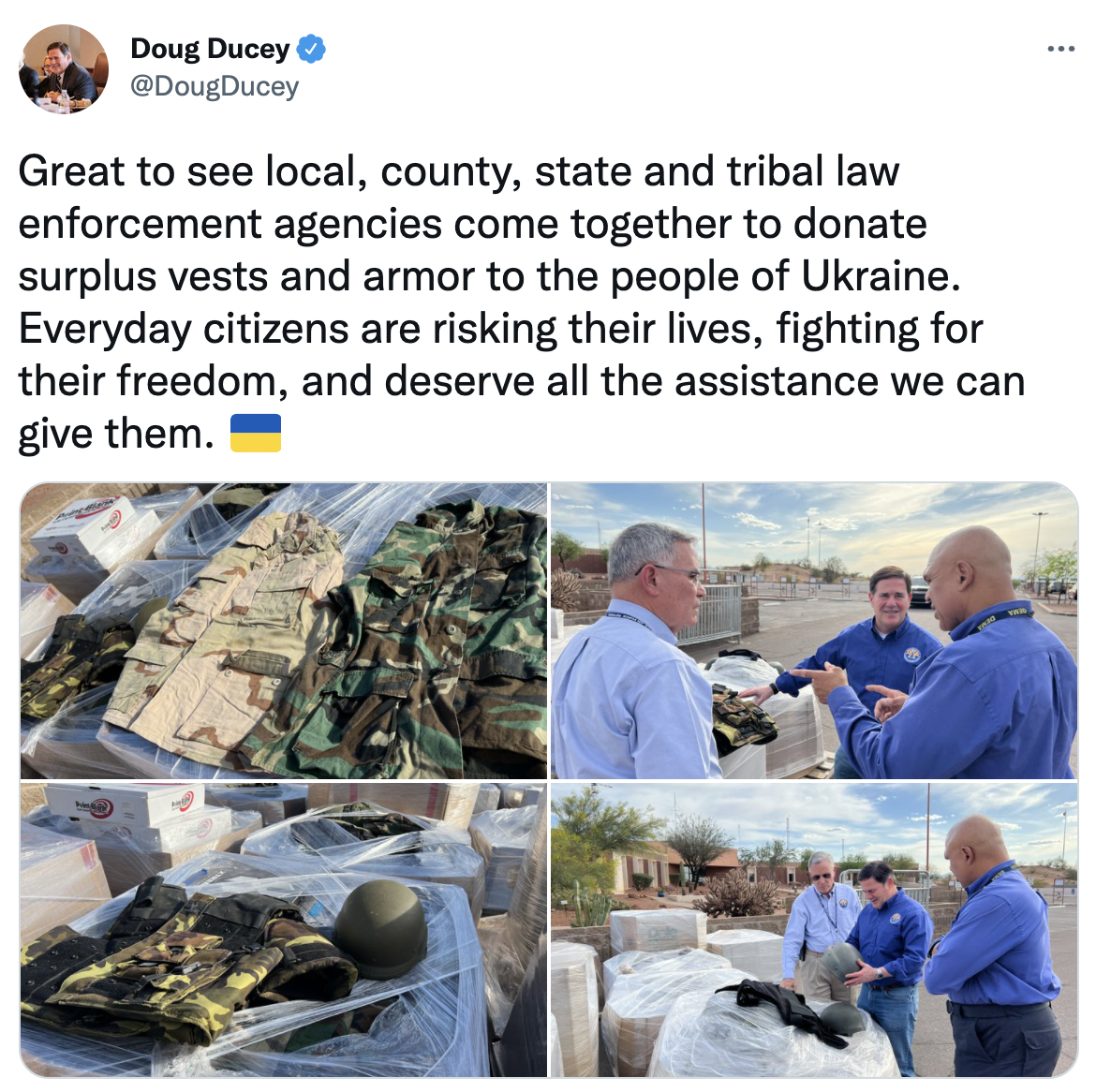 The equipment was provided by:

Last week, Governor Ducey met with members of St. Mary’s Ukrainian Orthodox Church to express condolences on the terrible violence happening in Ukraine and how to best offer support. The Governor also met with Russian politician Vladimir Kara-Murza on the Russia-Ukraine situation and how to better assist the Ukrainian community. The Ukrainian flag flies in front of the Arizona State Capitol alongside the state flag.

On Wednesday, in an address before the Phoenix Committee on Foreign Relations, the Governor was unsparing in his assessment of what is happening in Ukraine.

“It goes without saying that Russia’s attack on Ukraine is evil and despicable. It’s an attack on democracy, an attack on freedom, and an attack on humanity. In 2017, Senator McCain called Putin a ‘murderer’ and a ‘thug.’ That still stands. The men and women of Ukraine are putting up an incredible fight — from President Zelensky to everyday citizens. They deserve all the support we can give them.”