PHOENIX – Arizona could soon make the largest single investment into its parks and trails in state history, under a budget proposal released recently by Governor Doug Ducey.

The $176.7 million spending proposal is aimed at making sure Arizona’s more than 30 parks and more than 175 miles of trails remain valuable assets for the millions of residents and tourists from around the world who visit them each year.

“This significant investment in our parks by Governor Ducey shows his strong support for our parks and their value to our rural communities,” said Bob Broscheid, executive director at Arizona State Parks and Trails. “Committing this significant funding to improve the functionality of the parks through water, wastewater, building improvements and historic preservation will ensure that these parks and their history are around for generations to come.”

According to a recent economic impact study, the statewide economic contribution of visitor spending in and around Arizona’s state parks was $449 million in 2020, and an estimated 4,200 jobs statewide are tied to our parks.

“Investment in our state parks system is an investment in rural Arizona,” said Debbie Johnson, director of the Arizona Office of Tourism. “Governor Ducey’s continued support of this vital industry demonstrates our commitment to economic development in communities throughout our state.”

Those comments were echoed by Lake Havasu Mayor Cal Sheehy.

"State parks are a tremendous economic driver for Lake Havasu," said Mayor Sheehy. "We're grateful to Governor Ducey's investment in improving the physical and digital infrastructure for state parks, which will drive more visitors to our great city."

Under Governor Ducey’s record-setting proposal, the 2023 budget invests in a comprehensive, large-scale 44-project strategy that will serve as a catalyst in modernizing the parks system, improving park facilities and expanding broadband connectivity. 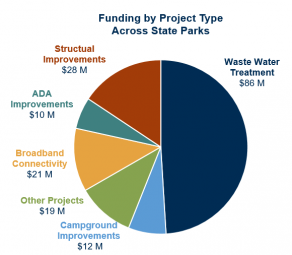 The majority of our parks are located in rural areas of Arizona, and are positive economic contributors for those communities. The funding proposed in the budget will improve park facilities, including those at rural area parks, such as Jerome, Payson, Patagonia/Sonoita, Oracle, Tombstone and Yuma. 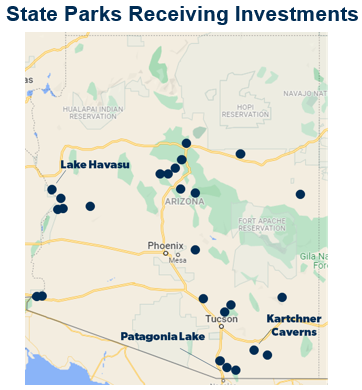 Arizona State Parks has been voted one of the best park systems in the nation, and by reducing the amount of deferred maintenance and improving amenities, Arizona will continue to represent a premiere destination for visitors, drawing people from all over the world to our parks and our communities.