PHOENIX — Governor Doug Ducey and eight other governors today will outline a plan to make our country’s southern border safer and more secure. Here’s the background:

The Biden administration’s complete neglect of the border has led to the worst border crisis in over two decades. This is directly impacting Arizona's communities.

Already this year, border officials have seized almost 2,000 pounds of fentanyl and over 13,000 pounds of methamphetamine in Arizona’s border sectors alone. Our law enforcement officers are the best of the best, but they aren’t able to stop every pound of drugs that comes through our borders. Lethal drugs are slipping through the cracks and into our communities. Fentanyl overdoses have replaced car accidents as the leading cause of death for people aged 19 and younger in Pima County.

The border crisis has also led to a drastic rise in crime in our streets. Because our border sheriffs have to spread their personnel between the border and the rest of their counties, there are far fewer officers patrolling our streets and keeping Arizonans safe. Homicides in Tucson are up almost 60 percent compared to this time last year. Again, law enforcement officers work around the clock to protect Arizona's communities. But they can only do so much when thousands of migrants are flooding into the country every month.

On September 20, Governor Ducey and 25 fellow governors requested an urgent meeting with President Biden to find meaningful solutions to the border crisis. Their hope was to meet with the president and his team directly to discuss actions the administration can take.

The White House never bothered to respond to or even acknowledge the letter.

Because of the inaction from the Biden administration, border states have had to handle the crisis on their own. Governor Ducey has taken numerous actions to protect Arizona’s communities as the federal government remains missing in action.

Border Strike Force
Arizona’s Border Strike Force has been fighting criminal activity along the border and in Arizona communities since its creation by Governor Ducey in 2015, the first year of his administration.

The following day, Governor Ducey and a delegation of state lawmakers toured Arizona’s border in Yuma and received a briefing on the escalating humanitarian and security crisis from Border Patrol, local law enforcement and community leaders. 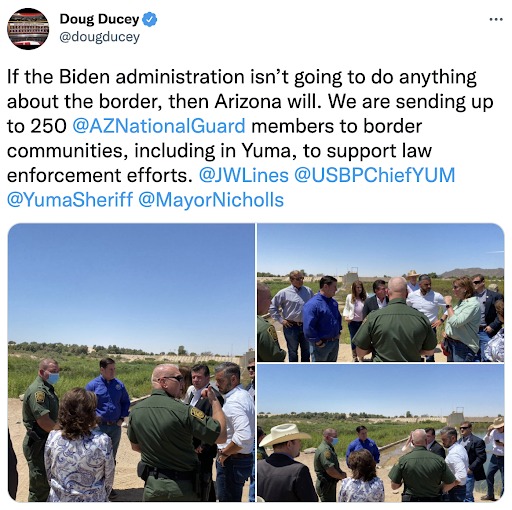 In June, the Arizona Legislature passed and Governor Ducey signed the FY 2022 budget, which included $25 million in state funding for the National Guard border mission and $30 million to assist law enforcement with border security operations, in addition to existing funding for the Border Strike Force.

In August, Governor Ducey announced a one-year extension of the Arizona National Guard’s border security mission. The extension means law enforcement officers serving along the border will continue to receive much-needed support as they work to defend against criminal activity.

Law Enforcement
In June, Governor Ducey and Texas Governor Greg Abbott sent a letter to all U.S. governors asking them to send available law enforcement resources to the border. Law enforcement support from other states will provide additional manpower in Arizona and Texas, allowing for the apprehension of more perpetrators of state and federal crimes before they can cause problems in border communities and all states across the nation.

In March, Governor Ducey traveled to Douglas, Arizona with Florida Senator Rick Scott to get a first-hand view of the security and humanitarian situation at the border. After taking an aerial border tour, the Governor received a briefing and held a press conference and a border security roundtable. 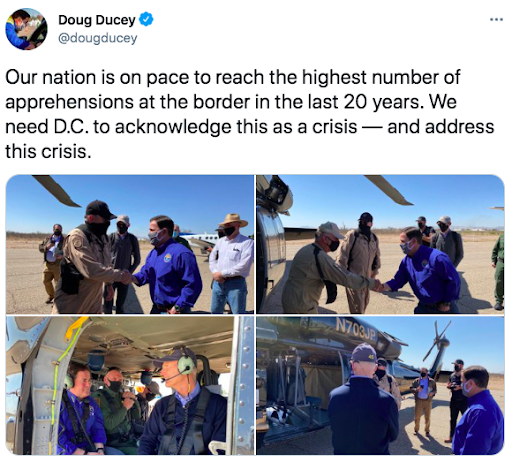 Additional Actions
In August, Governor Ducey called for the resignation of Secretary of Homeland Security Alejandro Mayorkas following explosive leaked comments in which Mayorkas called the border crisis “unsustainable,” said “these numbers cannot continue” and said “if our borders are the first line of defense, we're going to lose.”

“Today we are seeing the truth of what’s playing out behind closed doors — what the federal government isn’t telling the American people,” Governor Ducey said. “Chaos, dysfunction and a defeatist attitude have infiltrated the highest level of the U.S. Department of Homeland Security. This administration has completely lost control of the border. And with his comments, Secretary Mayorkas demonstrated that he fully understands the catastrophe playing out at the border, and yet he lacks the skill, ability and will to address it adequately.”

In May, Governor Ducey joined 19 fellow governors to call on President Biden and Vice President Harris to reverse their destructive border policies.