PHOENIX — Governor Doug Ducey today met with leadership at the U.S. Border Patrol’s Tucson Sector Headquarters for a briefing on the recent spike in drug seizures and the record 1.7 million migrant apprehensions over the past year.

“We’ve been saying for months that our country has more than just a border crisis — we have a humanitarian crisis,” said Governor Ducey. “Children and families have faced illness, violence and death on their treacherous path to our border. This has direct implications for Arizona, especially our border communities. All Arizonans—all Americans—owe a debt of gratitude to the men and women of the Border Patrol for their dedication and hard work. Thank you to Tucson Sector agents for today’s briefing and for the frank assessment on what they’re seeing on the ground and what additional actions are needed.”

In October, Border Patrol agents rescued two sisters, ages four and six, wandering alone near the Morelos Dam in the Yuma Sector. The girls were taken into custody and carried a note with the contact information for their “tia”. Unfortunately, not all who attempt to travel across the border are as lucky. In September, a mother and her 10-year-old daughter were found in the Yuma desert succumbing to heat exposure, with her two-year-old son found alive near his mother’s body.

“We need leadership from the federal government,” the Governor continued. “The Biden Administration needs to communicate that our border is closed. Arizona is prepared to protect our border, and we’ve taken steps to fill the void the federal government has left and will continue to do so. Arizona is dedicated to supporting Border Patrol agents and local law enforcement officers.”

The Governor was joined by Tim Roemer, Director of the Arizona Department of Homeland Security. They were given operations and intelligence briefings, then toured the Border Patrol Command Center. 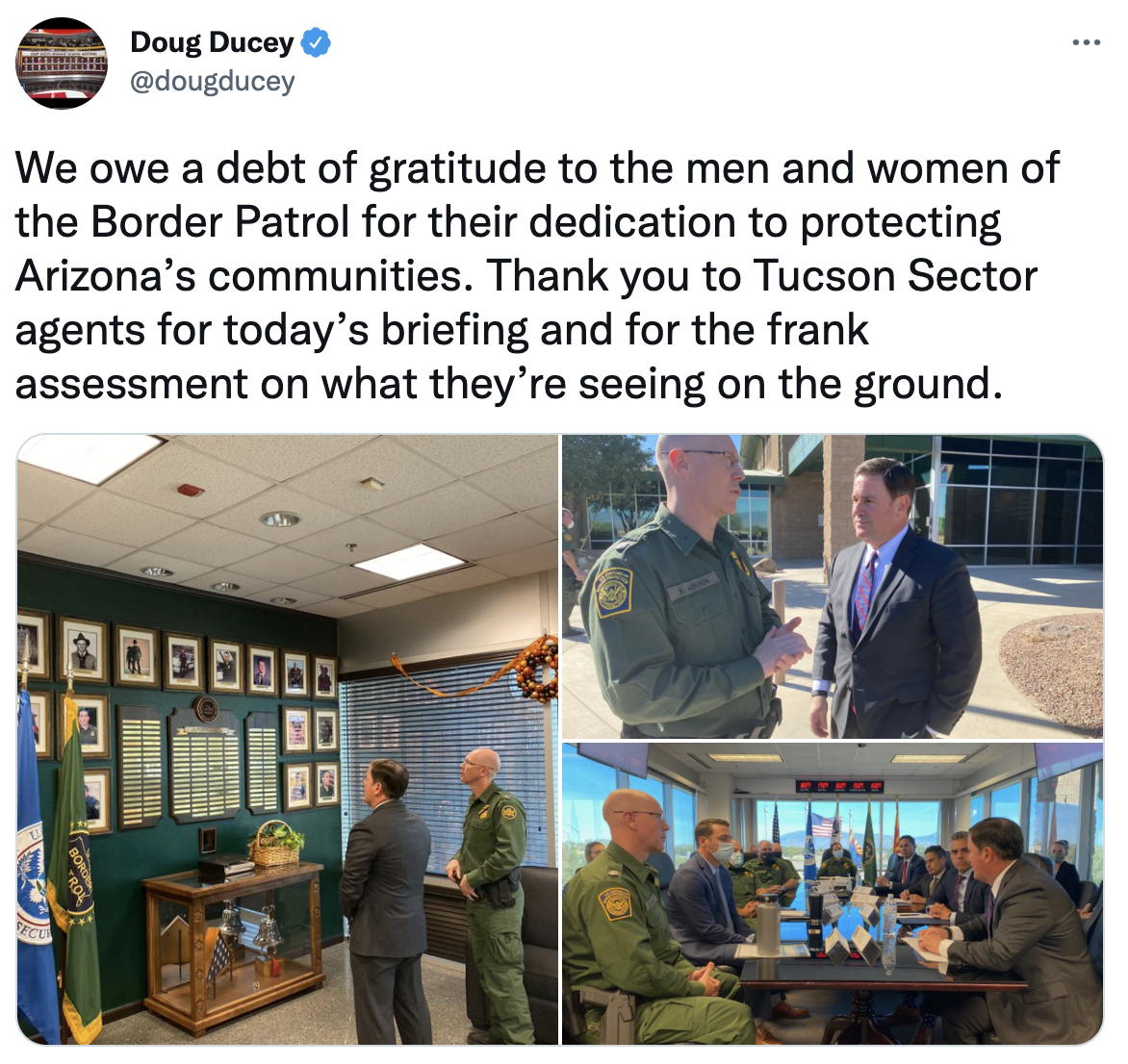 The Tucson border sector covers 262 border miles and is one of the busiest sectors in the country for both illegal alien apprehensions and marijuana seizures. It has approximately 3,700 agents working in nine stations. The headquarters oversees the entire Tucson sector including the operations, administration and operational programs.

BACKGROUND
In the beginning of October, Governor Ducey joined Texas Governor Greg Abbott and eight other governors in Mission, Texas for a border security briefing and press conference, where they detailed a ten-point plan for the Biden administration to resolve the border crisis.

Throughout this year, Governor Ducey has taken numerous actions to address the border crisis in Arizona. You can read more about the actions he has taken HERE.