“This bill is an important step in ensuring members of tribal nations and communities have the right to represent their culture,” said Governor Ducey. “In one of the biggest and proudest moments of their life, students should be able to wear items which honor their traditional culture and beliefs. I am thankful to Representative Teller for sponsoring this bill, and to Representative Blackwater-Nygren and Representative Cook for getting this bill to the finish line. I’d also like to thank Gila River Indian Community Governor Stephen Roe Lewis for his support in getting this legislation passed.” 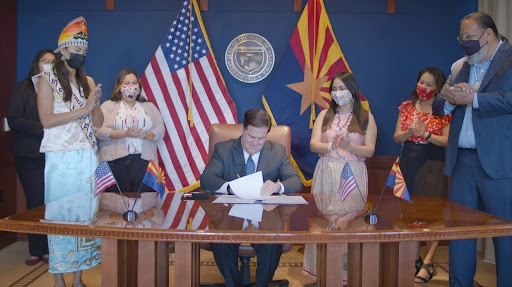 Under current Arizona law, a school district cannot prohibit a student from wearing a religious or cultural accessory during an extracurricular activity. This bill goes further to include tribal regalia in the protection of the law.

“Today’s bill signing ceremony is an important event for Arizona and native cultures,” said Gila River Indian Community Governor Stephen Roe Lewis. “Our students should be able to wear their traditional regalia at graduations with pride. I’m thankful to Governor Ducey and the Arizona legislature for recognizing the importance of this issue and taking action to protect this cultural right.”

The bill’s sponsor and a member of the Navajo Nation, Representative Arlando Teller, left his seat to become the Deputy Assistant Secretary for Indian Affairs at the U.S. Department of Transportation. Representative Jasmine Blackwater-Nygren, also a member of the Navajo Nation, filled his seat and took the lead on HB 2705 to get the bill through the finish line. Representative Cook sponsored similar legislation in 2020 that was held up in the shortened legislative session due to the COVID-19 pandemic, but was instrumental in pushing the current bill to the end.

“All Arizonans should have the right to exercise religion and speech under the First Amendment of our Constitution, and this law upholds that,” the Governor said.

Governor Ducey has signed a number of bills to protect and improve K-12 education in Arizona. From furthering Holocaust education, protecting education transparency, and implementing the Education Recovery Benefit Program, education has been at the forefront of the Governor’s agenda.