Joining the Governor for the discussion were a professor from Arizona State University, a teacher from Mesa High School and former Arizona Supreme Court Chief Justice Ruth McGregor, a former law clerk to Justice O'Connor.

“​​I’m confident that if we prioritize civics education, we can inform more of our kids about our nation’s history and values, and return to a place where we can have civilized debate,” Governor Ducey said. “Following the lead of Arizona’s own Justice O’Connor, our state has set the standard for civics education.”

The second annual Sandra Day O’Connor Civics Celebration Day is September 25. It was established through legislation sponsored by Rep. Shawnna Bolick of Phoenix in 2020, fulfilling one of the Governor’s legislative priorities. This celebration falls on the anniversary of O’Connor being sworn in as the first female U.S. Supreme Court Justice on September 25, 1981. 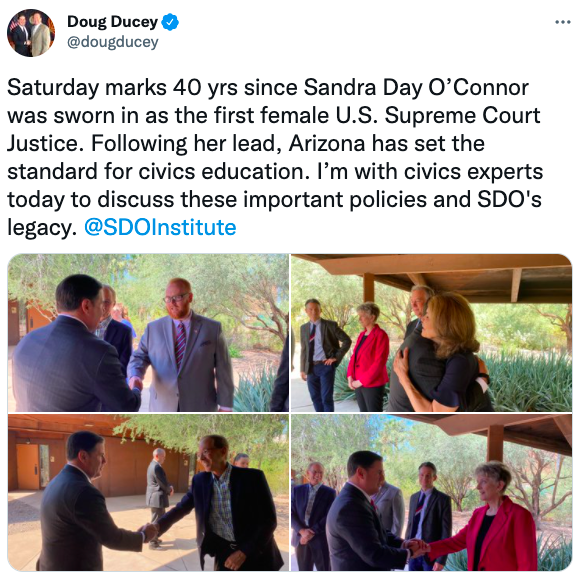 Justice McGregor told the panel, “We have to make sure that the education of our students explains the advantages, the positives of living in a democratic society. If we don’t talk about that, if we don’t allow them to compare it with authoritarian governments, then why do they care if things aren’t working well? And once they care, then they have an opportunity to see what works right and what works wrong and how we can change the things that aren’t working correctly.”

Enright said that as kids transition back into classrooms and in-person learning, schools and educators should focus on “using reading as a vehicle to teach civics and social studies, especially when they’re youngsters.” He also added that “Our country was built on the idea that it’s the citizen who has the power” rather than the government.

BACKGROUND
This weekend marks the 40th anniversary of O’Connor being sworn in as the first woman on the U.S. Supreme Court. Appointed by President Ronald Reagan and sworn in by Chief Justice Warren Burger, O'Connor received unanimous approval from the U.S. Senate. She served 25 years on the bench before retiring in 2006.

In March 2020, Governor Ducey signed legislation establishing Civics Celebration Day, a day in which a majority of classroom instruction is devoted to civics education. Schools districts and charter schools across the state used a wide range of engaging activities during Civics Celebration Day last year to teach students about civics and highlight O’Connor’s dedication to promoting civics education. Tomorrow, students across Arizona will again celebrate this important day.

In 2015, Governor Ducey signed the American Civics Act to ensure all Arizona students understand American civics, requiring the passage of a civics test before graduating high school. It was the first bill he signed as Governor, making Arizona the first state in the nation to enact such a law.

Governor Ducey recently signed legislation to strengthen education about the Holocaust and other genocides in Arizona’s schools. He also announced plans to work with educators and lawmakers to make the teaching of the September 11, 2001 terrorist attacks mandatory in schools.