The legislation requires young Arizonans to learn the enduring lessons of the Holocaust and the tragic consequences of religious and racial intolerance.

“Arizona has long been a leader on civics education, but it’s clear we need to extend our curriculum to more closely cover the horrors of the Holocaust,” said Governor Ducey. “This bill is a step in the right direction but our work is far from over. Antisemitism and other forms of hate are real, and we must do more to make sure this never, ever happens again. My thanks to Representative Alma Hernandez for leading this effort, along with Speaker Bowers and all of the survivors who have dedicated their lives to spreading awareness." 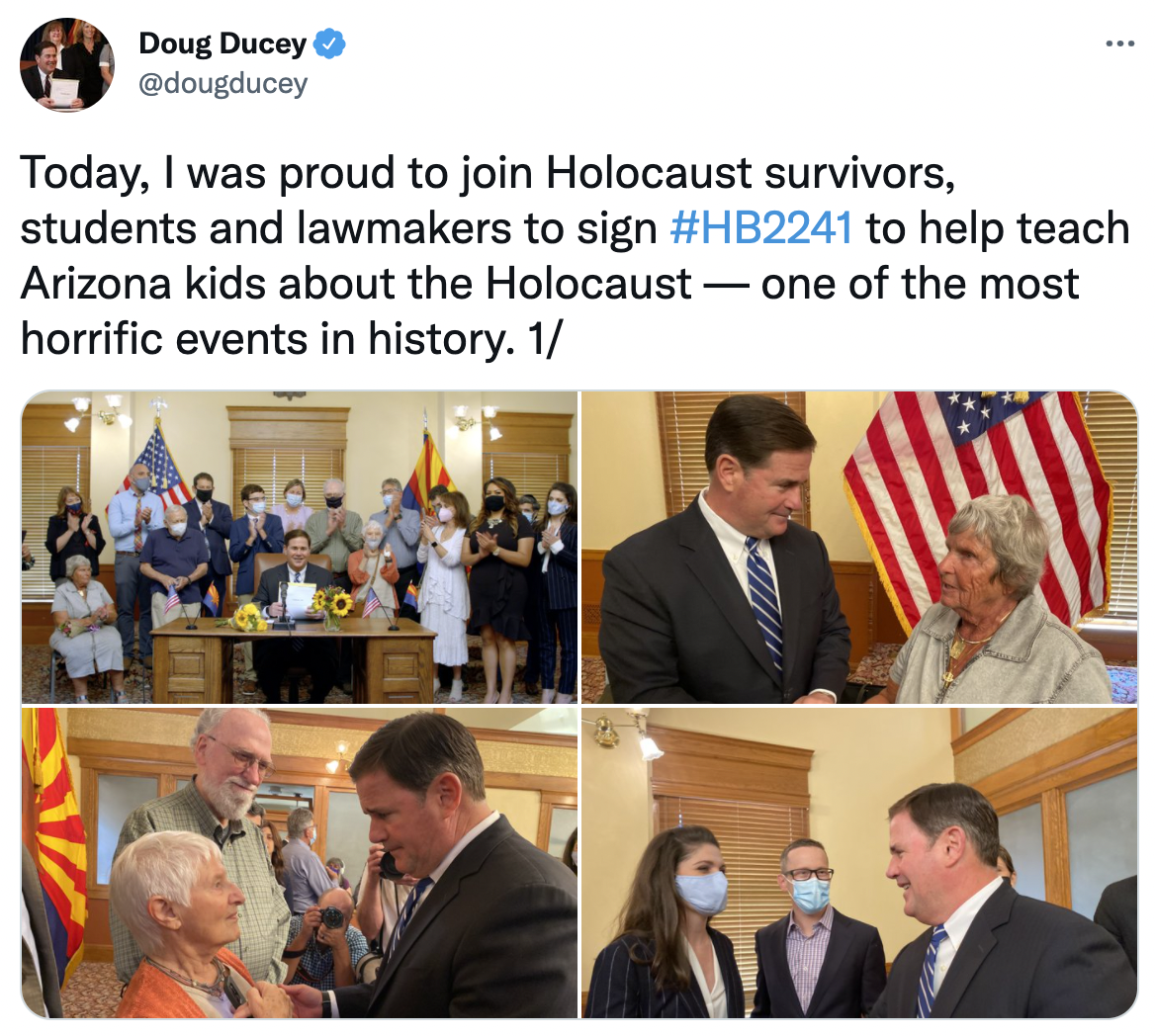 House Bill 2241 will require the State Board of Education to adopt requirements for students to be taught about the Holocaust and other genocides at least twice between 7th and 12th grades. Representative Alma Hernandez, an unwavering advocate for Holocaust survivors and Arizona’s Jewish community, sponsored the legislation.

“I can’t begin to express how proud I am to see this important legislation get signed,” said Representative Hernandez. “Thank you to the Holocaust survivors, advocates, students and community leaders who supported House Bill 2241. This is a big win for not only Arizona’s Jewish community, but for the future of our state. My thanks also goes to Governor Ducey for his continued support in our efforts to reject antisemitism and expand Holocaust education.”

According to a Pew Research Center study conducted in 2019, fewer than half of respondents could correctly answer multiple-choice questions about the number of Jewish individuals who were murdered during the Holocaust or the way that Adolf Hitler came to power.

“This important bill will strengthen our youth’s understanding of a dark time in history,” said Speaker of the House Rusty Bowers. “I’m grateful to Representative Hernandez for her effort in leading this bill in the legislature. It was an honor to work with my colleagues to get this done, and I’m grateful to Governor Ducey for signing this bill into law.”

“These antisemitic acts are disgraceful and unacceptable, and we’re going to do everything we can to ensure Arizonans of the Jewish faith are treated with respect, dignity and humanity,” the Governor said during the signing ceremony.

View a video of Holocaust survivors talking about the legislation HERE.

For education resources on the Holocaust and other genocides, visit the Phoenix Holocaust Association and Arizona Department of Education websites.

With the signings of Senate Bills 1391 and 1660 and House Bill 2410, Arizona is taking steps to ensure more children across the state are safe. Senate Bill 1391 protects a child’s right to be represented by legal counsel in dependency cases, Senate Bill 1660 helps protect vulnerable children from sexual abuse and sex trafficking, and House Bill 2410 increases the age of a newborn which can be delivered into the safe haven program from 72 hours to 30 days old.

The signing of Senate Bill 1802 makes National Navajo Code Talkers Day, which fell on last Saturday, an official state holiday every year on August 14. The legislation honors the 400 Navajo men who developed an unbreakable code during World War II.