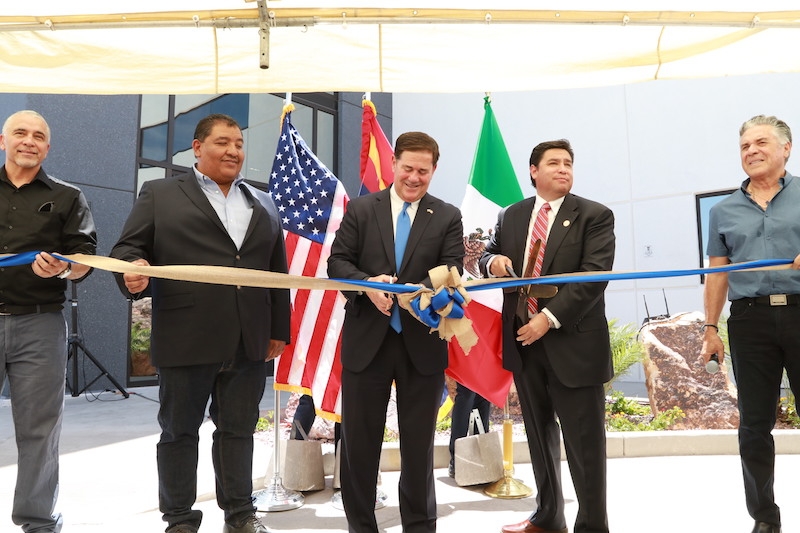 The Governor also participated in an economic roundtable with 17 business and community leaders from Santa Cruz County and toured the state of the art facility.

“A strong Arizona-Sonora relationship is a strong U.S.-Mexico relationship,” said Governor Ducey. “The hard work and dedication of importers in Santa Cruz County help make trade between our countries successful. This new refrigerated facility in Nogales will help further this partnership, create jobs, and support continued economic growth. My thanks to the Chamberlain Distributing team and everyone working to make Arizona’s trade relationship with our neighbors in Mexico even stronger.”

Chamberlain Distributing is a large trading company in Nogales, Arizona that imports fruits and vegetables from cities in Mexico including Sonora and Oaxaca. Its new facility, St. James Cooler, is equipped with state of the art technology to help further trade between Arizona and Mexico.

On top of increasing trade opportunities, the 60,000 square foot cooler facility will help create additional jobs and further expand commerce in the state.

Mexico remained Arizona’s top trading partner, even during the pandemic, with trade between Arizona and Mexico totaling nearly $16 billion in 2020. Truck traffic also increased last year by more than 2,600 trucks, with more than $13 billion worth of imports moving through the Nogales port alone.