PHOENIX — Governor Doug Ducey and a delegation of state lawmakers today toured Arizona’s border in Yuma and received a briefing on the escalating humanitarian and security crisis from Border Patrol, local law enforcement and community leaders.

The tour follows the Governor’s announcement yesterday to issue a Declaration of Emergency and deploy the Arizona National Guard to support law enforcement efforts.

“Here in Arizona, we are willing to step up and do our part to protect our communities and secure the nation’s southern border,” said Governor Ducey. “I have deployed the national guard to provide logistical, field and operational support to law enforcement along the border, but there’s more work to be done.

“There has been no action from the Biden administration, and I call on the federal government to do more to resolve this crisis,” the Governor continued. “Until there is federal action, Arizona is ready to do our part. I am grateful to our state leaders, law enforcement, legislators, and to everyone who has stepped up and offered support during this crisis.”

The Governor received a briefing on Border Patrol operations from Chris T. Clem, Chief of the Border Patrol Yuma Sector. The Yuma Sector encompasses 126 miles of international border with Mexico, with three checkpoints currently manned by over 700 Border Patrol agents.

Following the briefing, the Governor attended a roundtable discussion with state legislators, local elected officials and agriculture leaders to discuss the effects of the migrant crisis and how to mitigate the increase in illegal crossings.

The Governor then went on a tour of the Yuma border wall to observe the area where migrants are crossing frequently, and held a press conversation with members of the media. 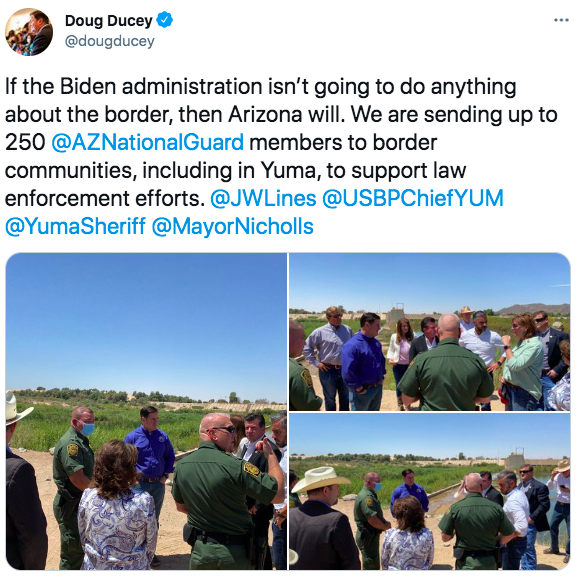 The team of up to 250 Guardsmen, along with state troopers and other law enforcement agencies, will assist with medical operations in detention centers, install and maintain border cameras, monitor and collect data from public safety cameras, and analyze satellite imagery for current trends in smuggling corridors.

The state will provide up to $25 million in initial funding for the mission.

Since January, the U.S. has been experiencing a rapid increase in illegal crossings and migrant children in federal custody. U.S. Customs & Border Protection in March had more than 170,000 apprehensions at the Southwest border, the highest number in any month in at least 15 years.