PHOENIX — Governor Doug Ducey today received his second dose of the COVID-19 vaccine during a tour of the state-supported University of Arizona vaccination site.

The Governor was joined by Arizona Department of Health Services Director Dr. Cara Christ and University of Arizona President Dr. Bobby Robbins during the site visit. Dr. Christ administered the second dose of the Pfizer COVID-19 vaccine for the Governor.

“Volunteers, health care professionals and university staff have worked tirelessly to distribute the vaccine to thousands of Arizonans,” said Governor Ducey. “Because of their efforts, we’ve been able to administer thousands of doses at the University of Arizona and nearly 3 million across the state. My thanks to Dr. Robbins, the entire team at the university, and everyone working to get the vaccine into Arizonans’ arms.” 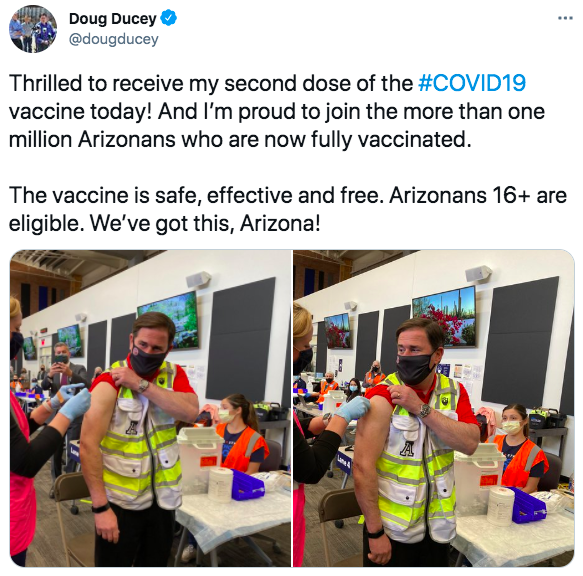 The vaccination site tour comes as Arizona opened COVID-19 vaccine eligibility this morning for all Arizonans 16 and older at state-run sites. The Governor also participated in a roundtable discussion with the southern Arizona business leaders and received a briefing from President Robbins about the university’s latest efforts to vaccinate Arizonans and protect students and faculty from the virus.

“Our team has worked incredibly hard to vaccinate students, faculty, staff, and southern Arizonans quickly and safely,” said President Robbins. “We are proud to play such a critical role in the state’s response to COVID-19 and vaccine distribution, and I am grateful to the Governor and the Arizona Department of Health Services for their continued support. Thank you to the students, staff, volunteers and medical professionals at the University of Arizona who are dedicated to protecting one another and expanding vaccinations.” 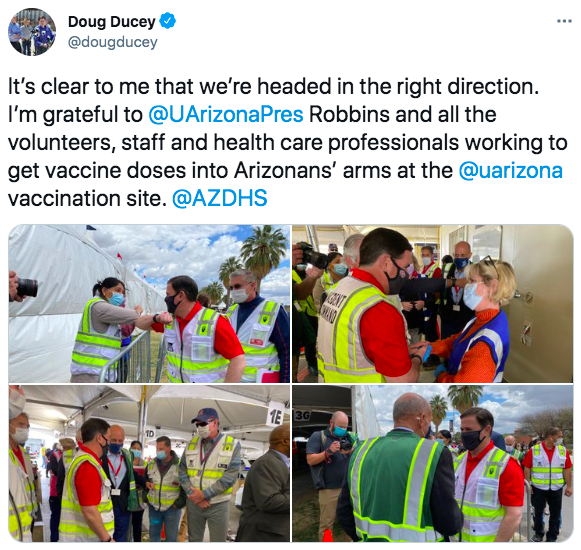 The University of Arizona vaccination site is the first state-run site in southern Arizona. The state’s vaccination sites have administered thousands of vaccine doses for Arizonans, including:

Additionally, the state’s latest vaccination site will open on March 29 at the Yuma Civic Center.

Since December, nearly 3 million doses have been administered across Arizona. The state-run vaccination sites complement county vaccination programs and the growing availability of vaccines at pharmacies and federally qualified health centers participating in federal vaccination programs.