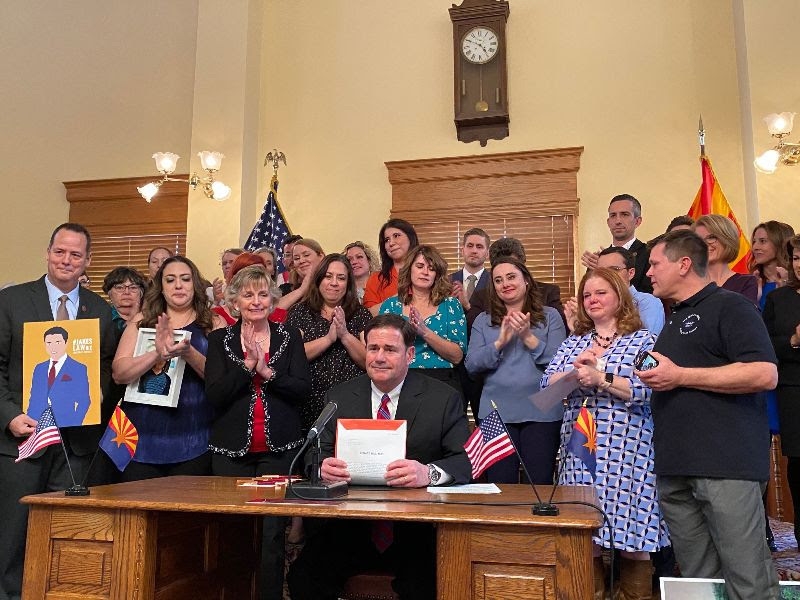 “With Jake’s Law, Arizona is taking action to improve access to mental health services and save lives,” said Governor Ducey. “This historic reform is the product of months of work to bring all stakeholders and advocates together. It will help countless families in times of crisis, especially those most in need. My thanks go to Senator Kate Brophy McGee and Representative Jeff Weninger for their leadership, to President Fann and Speaker Bowers, and to all the family members and advocates who bravely stepped forward to share their stories and worked to make this bipartisan achievement possible.”

S.B. 1523 is named in honor of Jake Machovsky, an Arizona teen who lost his life to suicide in 2016 after battling mental health issues. Jake’s parents, Denise and Ben, started the JEM Foundation to end youth suicide and expand behavioral health services.

"Too many families have had to endure the tragedy of losing a loved one to suicide,” said Senator Kate Brophy McGee. “Jake’s Law will help make sure no family is turned away from accessing the critical mental health services that can save a life. My sincere thanks to Governor Ducey for his support and to families like Denise and Ben Denslow for their tireless advocacy. Jake’s Law is for them.”

“This legislation is a big step toward preventing suicide and saving lives throughout the state,” said Representative Jeff Weninger. “I am thankful to the advocates across Arizona who have stepped up to increase access to mental health resources and to Governor Ducey and my fellow legislators, who passed this law with unanimous support.”

Jake’s Law requires insurance companies to cover mental health treatment, just like they would with an annual physical. It also creates the Children's Behavioral Health Services Fund and provides $8 million for behavioral health services for children who are uninsured or underinsured. In addition, the bill prohibits insurance companies from denying coverage for services that are covered by the plan simply because they are delivered in an educational setting.

What’s more, Jake’s Law establishes a Mental Health Parity Advisory Committee to ensure that all parties including families, providers, advocacy organizations and insurers have a voice at the table. It also creates a Suicide Mortality Review Team to review deaths by suicide and provide policymakers with improved data and recommendations. Jake’s Law also helps to increase follow-up services for patients who visit a hospital and are at risk for suicide.