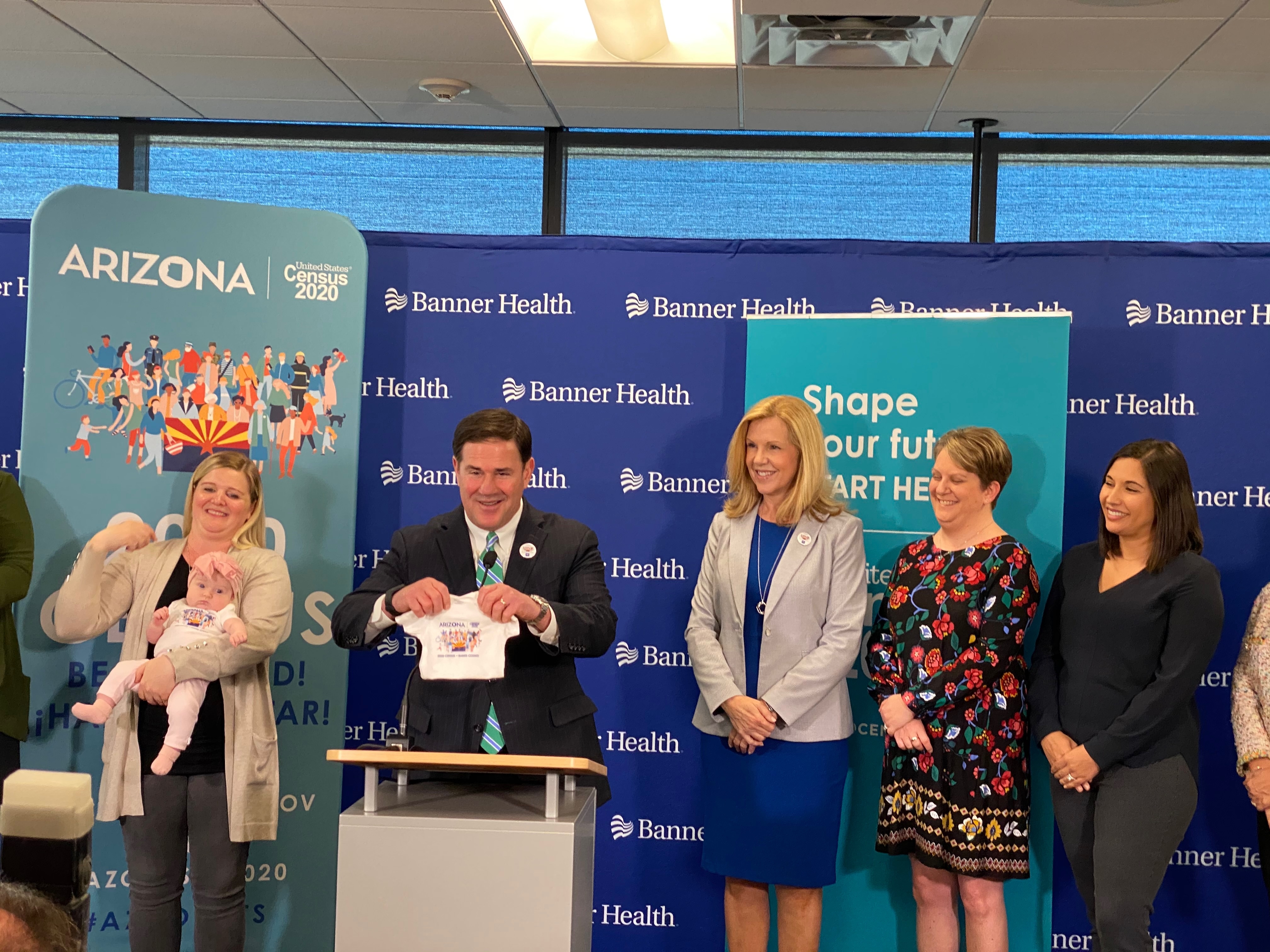 PHOENIX — Governor Doug Ducey and Banner Health today announced an initiative to promote participation in the 2020 Census, leading up to the beginning of census self-response this week. The partnership highlights the importance of counting newborns and young children, one of the most often undercounted populations in the census, with the distribution of 1,000 AZ Census 2020 onesies across Arizona.

“Counting our newest Arizonans in their first census is critical for the 2020 Census,” said Governor Ducey. “Counting every Arizonan—including those who are traditionally undercounted—will ensure we have the tools needed to continue growing and create opportunities. My thanks to Banner Health, the Arizona Complete Count Committee and everyone working to ensure all Arizonans are counted.”

The decennial census determines the distribution of more than $675 billion in federal funding to states, as well as the number of representatives from Arizona in the U.S. Congress. Self-response to the 2020 Census begins on March 12, online, by phone or mail, when the majority of Arizona households will receive an invitation to respond.

“There is a lot at stake with the 2020 Census, and we are committed to letting every Arizonan know that the census is safe, easy and important,” said Debbie Johnson, Chair of the Arizona Complete Count Committee. “Our complete count will ensure we get our fair share of federal resources for important programs that keep our kids and Arizonans of all ages safe and healthy.”

Federal funding guided by the decennial census supports programs that support hospitals and healthcare in Arizona and the bulk of funding for children’s healthcare insurance in the state as well as low-income mothers of newborns. Just a one-percent undercount of Arizonans could result in an annual loss of $62 million or $620 million over the next decade.

“A complete count of Arizona's 2020 Census will help to ensure we have the resources for critical programs that keep our moms and children, especially for our newborns and young children, healthy and safe,” said Dr. Michael Foley, Women and Infant Service Line Physician Executive at Banner – University Medical Center Phoenix.

Banner Health will lead the distribution and awareness campaign with new parents delivering in their hospital system through the end of the 2020 Census on July 31, 2020. For more information about the 2020 Census and its impact on Arizona, visit azcensus2020.gov.

“An accurate census count is essential to appropriately allocate federal funds for programs and services that support maternal and infant health,” said March of Dimes President and CEO Stacey D. Stewart. “We must ensure that children and non-native English speakers, who are often missed in the census, are counted so that funding is properly allocated for Medicaid, the Children’s Health Insurance Program (KidsCare), and other vital programs.”