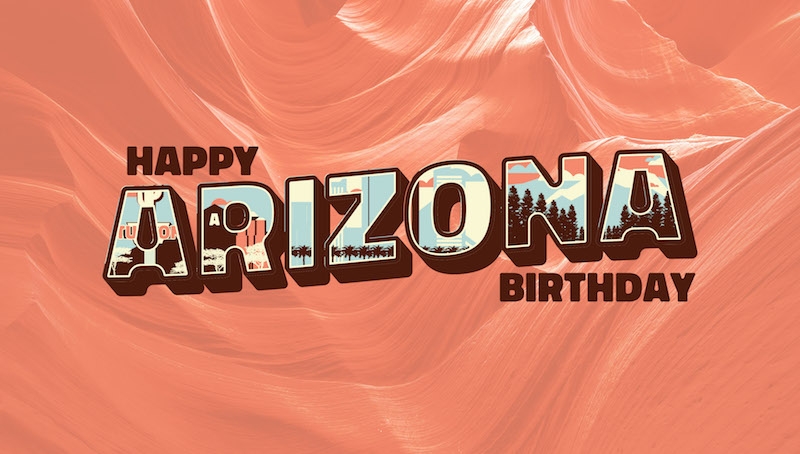 “On this day 108 years ago, Arizona officially became a state of this great nation. Since then, Arizona has welcomed visitors, newcomers and multi-generation Arizonans with its awe-inspiring landscapes, cultural diversity, rich heritage, sunshine and blue skies, endless possibilities and much more.

“From the red rocks of Sedona to the towering saguaros of Tucson, and from the bustling streets of downtown Phoenix to the serenity of Pinetop, Arizona is the best place to call home. I’m grateful to live in Arizona and raise my family in a state full of beauty, friendliness and opportunity. Happy birthday, Grand Canyon State. We love you!”

View a PDF of the proclamation HERE.

WHEREAS, on February 14, 1912, after forty-nine years as a U.S. territory, President William Howard Taft signed the Arizona Statehood Act, making Arizona the forty-eighth and last of the contiguous states to enter the Union of the United States of America; and

WHEREAS, news of Arizona’s statehood was telegraphed to the people of Arizona, Governor George W.P. Hunt was inaugurated and the Legislature was called into its first session; and

WHEREAS, for 108 years, people have come to make Arizona their home, drawn by its striking landscapes, rich history and proud heritage, unlimited opportunities, warm hospitality, and the chance to be part of a prosperous and dynamic state; and

WHEREAS, Arizona Statehood Day affords Arizonans an opportunity to celebrate our pioneer spirit, immense diversity, and cherished traditions; and

WHEREAS, Statehood Day 2020 encourages all citizens to take an active role in commemorating Arizona’s strong foundations and great accomplishments, as well as to look toward new opportunities and the bright future ahead.

NOW, THEREFORE, I, Douglas A. Ducey, Governor of the State of Arizona, do hereby proclaim February 14, 2020, as

and encourage citizens to participate in all activities in recognition thereof.

IN WITNESS WHEREOF, I have hereunto set my hand and caused to be affixed the Great Seal of the State of Arizona

DONE at the Capitol in Phoenix on this eleventh day of February in the year Two Thousand and Twenty and of the Independence of the United States of America the Two Hundred and Forty-Fourth.