Arizona Recognized For Policy Leadership In Removing Barriers To Work

Arizona’s leadership to reduce occupational licensing barriers and get people to work faster took center stage this weekend at the annual meeting of the National Governors Association in Washington, D.C.

On a panel with Democrat and Republican governors from across the country, Governor Doug Ducey highlighted Arizona’s efforts to reduce barriers on job seekers, including becoming the first state in the nation to implement universal recognition of occupational licenses, as well as the additional licensing reforms sought this year.

“Well if I could, I would walk out of this room right now and fly back home and talk to our Legislature about passing the exact same law because I’m very concerned about losing Kansans to Arizona. Because I agree with you, I think it is a very smart thing to do,” said Governor Kelly. 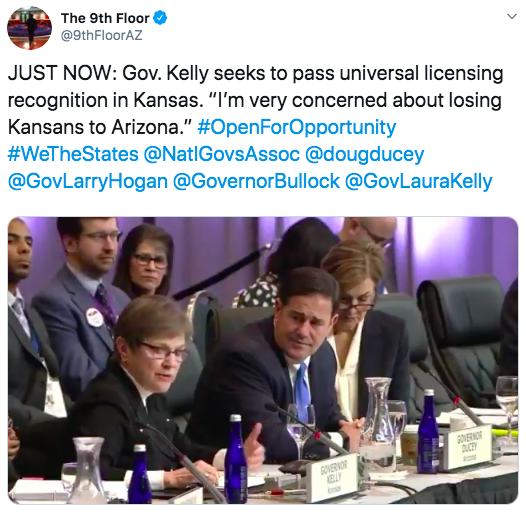 “Thanks for your leadership in Arizona on this. It’s a great national model that we can learn from,” said Governor Polis.

In Arizona, each agency is required by statute to review all its rules at least once every five years to determine whether anything should be amended or repealed. This law has helped Arizona maintain one of the least-complex regulatory codes in the country...Arizona's Republican governor, Doug Ducey, has been working to do even more. The state created an online portal for those who live and work under its regulations to make recommendations and tell their stories, and it exceeded its target to reduce red tape. Arizona was fourth in the nation for economic growth in 2018.

Please see a full transcript of Governor Ducey’s comments on licensing reform from the event below:

Thank you very much, Governor Hogan, and thank you, Governor Bullock. I want to say while you'll hear Governor Kelly and I talking about occupational licensing, I hope what you're really hearing is how to grow prosperity in your individual state, because that's what this reform really does.

In 2017 we waived licensing fees for people earning less than 200 percent of the federal poverty level and we were proud that last year Arizona led the nation in lifting people out of poverty, and we believe that that policy had a place in that good result.

So several years ago we wanted to expand this even further. Arizona began recognizing licenses that were out of state for military spouses. It worked well so the thought was why not extend the same freedom to everyone. Today we're proud to say that Arizona is leading the way as the first state in the nation to grant universal recognition of occupational licenses from other states. The idea is straightforward. We believe that you don't lose your skills just because you pack up a U-Haul and move from one state to our state. We’re happy that you did. We want to welcome you. We want you to be able to get to work and earn a living.

This is about working men and women of America who are looking for their shot at the American dream. We want to make sure that there's no obstacle in their way to pursue it. Behavioral health professionals, dental professionals, contractors and more, over 600 Arizonans have received licenses under this new law in just a few months.

Just one example is after we passed the law and I believe before it even went into effect, I was back here in D.C. visiting. An Arizonian came up to me in the airport and introduced himself and was thrilled about the law but didn't think that it would support the license that he had. I asked him what his license was and he said he was a CPA, a Certified Public Accountant. And while we did pass it more for the trades and those types of things that you see in other states, the law does cover certified public accountants. So now he's in Arizona. He wanted to move there full time. He's going to get his license and get to work.

We’re proud of this progress. We think there's a real opportunity on this front and we're not going to slow down or rest on that laurel.

This year we've got a bill in the legislature that will require regulatory boards and commissions to have ordinary people—and I mean ordinary people and not industry insiders or cronies that are there to block or stifle competition—to make sure that it's those citizens that reflect a majority of the membership of these boards. The goal is to give unbiased public members more influence on these board decisions.

There's also a bill that will stop these boards from collecting additional fees once they hit a certain threshold of cash reserves. We have some of our boards stockpiling millions of dollars in cash while still collecting fees on hardworking Arizonans and we want that to end. And we are going to waive occupational licensing fees for our military heroes and their spouses.

Just as Arizona at this same setting at other NGA meetings has been able to glean so many great ideas from other states over the years, even though I believe this is a competitive advantage for Arizona in terms of population growth, I'd like to see every other state apply it because I think it will help the prosperity of our nation and allow people with skills to get to work without obstacles in their way. This is something I think you'll find broad bipartisan support for. That's what we found in Arizona so I want to thank you and turn it over to Governor Laura Kelly from Kansas to tell us what's going on in the heartland.