“Today’s historic signing ushers in a new era of trade for Arizona, our nation and North America,” said Governor Ducey. “The USMCA means more jobs and trade for Arizona and closer ties with Canada and Mexico, where the state exports nearly $10 billion in Arizona-made goods already.

“Today’s achievement was years in the making. It required working together, not just across party lines, but across international lines as well. It should be looked to as an example of what we can accomplish when we put the prosperity and well-being of the American people first. My thanks goes out to President Trump, Arizona’s Congressional delegation and everyone inside and out of the Administration who worked persistently to get this done.

“Arizona will continue to be a leader in growing international relationships that mean more prosperity and opportunity on both sides of the border.” 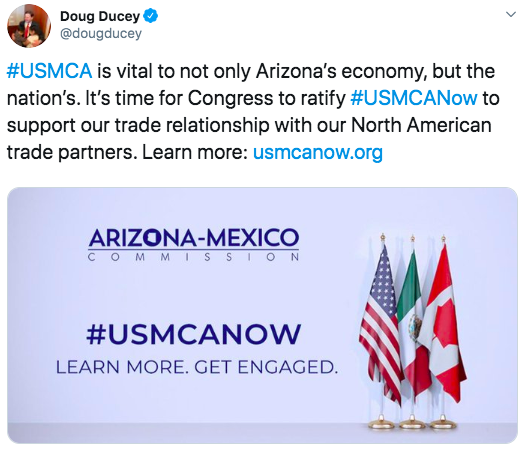 Last year, Governor Ducey launched the USMCA Now website to provide Arizonans resources to learn more about the USMCA and get engaged to support it. It features Arizona-specific information related to the state’s trade relationships with Canada and Mexico and outlines the benefits of the Agreement.

The Governor joined the U.S. Chamber of Commerce in September 2019 to discuss the USMCA and urge Congress to ratify it, citing the economic impact trade has in the state. He also spoke about the importance of ratification at events with Mexican Ambassador to the United States Martha Barcena and Sonora Governor Claudia Pavlovich.