Since 2015, Arizona’s Poverty Rate Has Declined 3.4 Percentage Points — The Fastest Rate In The Nation.

PHOENIX — According to data released by the American Community Survey, approximately 175,000 Arizonans pulled themselves out of poverty between 2015 and 2018. During that time, Arizona’s poverty rate decreased by 3.4 percentage points — the largest percentage point reduction of any state in the nation. Arizona is one of seven states across the nation in which poverty has declined for at least four consecutive years, according to the American Community Survey.

“With more than 350,000 new jobs added since 2015, we’ve worked hard to make Arizona a place of opportunity for all,” said Governor Doug Ducey. “From waiving licensing fees for those in poverty to increasing resources for job training and expanding second chance centers in our prisons, Arizona is working to empower all our citizens, but there’s more to do. We’ll continue to focus on policies that offer a hand up and give more people the opportunity to enter the workforce and make a better life for them and their families.”

Over the last four years, Arizona’s labor force has grown by more than 447,270 people from 3,145,072 in January 2015 to 3,592,349 in November 2019. During roughly the same time, the percentage of households considered food insecure has dropped from 15 percent to 12.4 percent, a ten-year low. Additionally, average weekly unemployment claims in the state have decreased by more than 9,770 since 2015.

Arizona is focused on providing opportunity to all through policies that increase the state’s competitiveness, reduce barriers to work and provide a hand-up to those in need. In 2017, Governor Ducey signed H.B. 2372, which requires state licensing boards to waive any initial licensing fees for first-time applicants from families earning less than 200 percent of the federal poverty level. The law has resulted in more than 880 fees waived for low-income applicants. 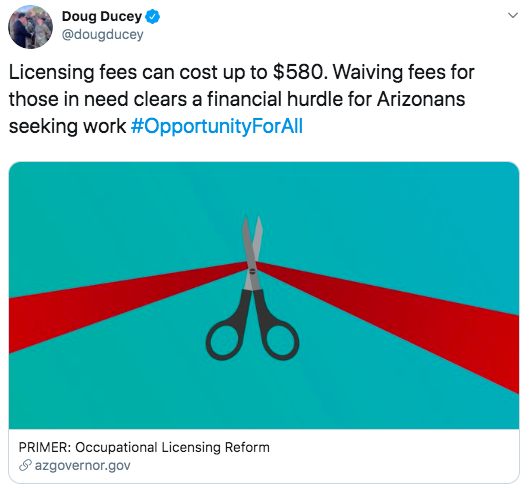 In April 2019, the Governor signed H.B. 2569, making Arizona the first state in the country to recognize occupational licenses for new residents. This enables new residents to get to work and start earning a paycheck faster, rather than facing unnecessary hurdles imposed by state government.

In 2017, Arizona launched Second Chance Centers to ease the transition back into society for those who have served their time. More than 3,700 of our fellow Arizonans have completed the program, equipping them with the tools and skills to make a better life. More than 2,400 had a job upon release. Governor Ducey’s Fiscal Year 2021 Executive Budget Proposal includes $9 million to expand Second Chance initiatives and educational programs and add additional substance abuse counselors.