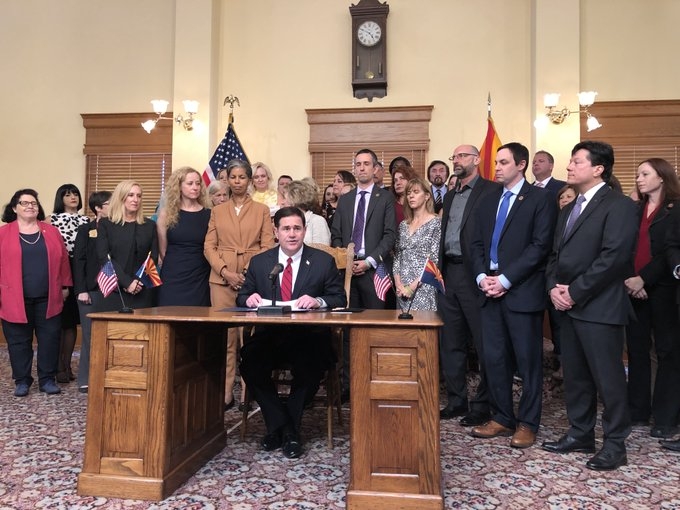 “Our hearts break for every life taken too soon due to suicide,” said Governor Ducey. “Sadly, we know that suicide is on the rise among Arizona and America’s youth, which is why Arizona is taking aggressive steps to raise awareness to save lives. My thanks to Mitch’s parents, Tim and Lorie, and to Senator Sean Bowie for leading the charge on this legislation at the Capitol, as well as to all our legislators for their unanimous support. Arizona now has another safety measure in place to fight the plague of suicide — and we will continue to work to shed light on this issue and keep our young people safe.”

The bill’s sponsor, State Senator Sean Bowie (D-18), was also in attendance at the signing ceremony.

"Suicides can be prevented when a student displaying warning signs is identified and counseled,” said Senator Bowie. “Our bill provides a critical tool for educators to spot those warning signs in their students who are at risk. I'm thankful to my legislative colleagues and the governor for their support on this."

S.B. 1468 was named in honor of Mitch Warnock, a student at Corona Del Sol High School in Tempe, who tragically died by suicide in 2016 during his senior year. The bill requires school districts and charter schools to provide training in suicide awareness and prevention to school guidance counselors, teachers, principals and other school personnel who work with students in grades 6 through 12.

“Today our son, Mitch, and every child whose life has been taken by suicide is honored by this legislation," said Tim Warnock, Mitch’s father. “I thank everyone who made this possible, including all of the wonderful people involved with Parents for Suicide Prevention. I also want to thank the governor and the legislature for taking action. Now the real work to save our children must continue.”

Mitch Warnock’s mother, Lorie, also paid homage to her son at the signing ceremony today. “We’ve been calling on lawmakers to do something on the issue of suicide for some time. No parent should ever have to experience what our family has experienced and this bill, in Mitch’s name, is a good step in that direction.”

“One life lost to suicide is one too many,” said Senate President Karen Fann. “Stemming from a tragic case, S.B. 1468, the Mitch Warnock Act, adds more training for our teachers that we know will help save lives.”

“It’s critical that school personnel be trained to identify students at risk of harming themselves and get them the help they need,” said Speaker of the House Rusty Bowers. “I applaud my colleagues in the Legislature for coming together to pass S.B. 1468 unanimously, and I thank Governor Ducey for signing the bill into law.”