Word On The Street: Back To School

Students across Arizona are headed back to school, where new resources and targeted reforms are making a difference. Through such initiatives as the Arizona Teachers Academy, teacher certification reform, results-based funding, 20% teacher pay raises by 2020, new flexible dollars for maintenance, upkeep, and other needs and more, Arizona is focused on setting up all our state's students for success.

Here are some of the ways in which Arizona's policies are making a difference in the classroom:

"Of the nearly 3,000 teachers in 89 schools, only 65 positions remain vacant. TUSD Superintendent Gabriel Trujillo says that progress is cause for celebration, but much more needs to be done.

"Trujillo says a rise in teacher salaries was most important in finding and retaining top-quality teachers, but he also says the district has been committed to providing a safer and more encouraging atmosphere for teachers. Research shows that is just as important to teacher retention." (8/6/19)

"But Vail is doing something other districts have shied away from. It's called the Pathway to Alternative Certification for Educators, or PACE." (8/17/19)

ABC 15: Arizona Teacher Academy Grads Start Careers In Classroom
"Students are not the only ones gearing up for a new school year. Some of the first graduates of the Arizona Teachers Academy are also heading back to class. The program launched in 2017 as a way to keep teachers in state and out of debt." (8/6/19)

Chamber Business News: Schools Motivated By Results-Based Funding
"A school finance policy known as “Results-Based Funding” has impacted schools since its approval in 2016, and education leaders have watched its motivational effects on other schools in their area.

"Because the dollars go directly to the school rather than the Central Office of the district or charter network, school principals have a lot of say in how the dollars are spent. Sandra L. Jimenez, Francisco Vasquez de Coronado Elementary School principal, explained the funding allowed her school to provide teachers with professional development, which ultimately benefits students." (5/6/19)

KTAR: Arizona Teachers Get Pay Raises For New School Year
"As the new school year gets underway, teachers are seeing more money in their paychecks.

"Teachers in the Mesa Unified School District got 5% pay raises this school year after getting 10% raises last year." (7/30/19)

Governor's Office: School Districts Go Above And Beyond the 20x2020 Commitment
As schools across Arizona prepare to kick-off the 2019-2020 school year, school districts are following through on, and exceeding, Arizona's commitment to provide teachers 20 percent pay raises by school year 2020.

"This month, Florence Unified School District (FUSD) approved teacher pay increases of 5% for the coming school year, bringing total raises over the last two years to 18%. Between fiscal years 2018 and 2020, average teacher pay in FUSD has increased from $43,993 to $51,723, with more on the way. During the same time period, the district's teacher retention rate increased from 80% to 89%." (7/26/19)

"The budget reflects a commitment to positively impact student achievement, and focuses funding toward student wellness and safety. The budget includes a 5% salary increase for teachers, marking the third straight year of increases in support of Governor Doug Ducey’s 20% by 2020 Plan. The District also absorbed an increase in employee healthcare premiums so that raises would not be reduced or, in some cases, negated." (7/12/19) 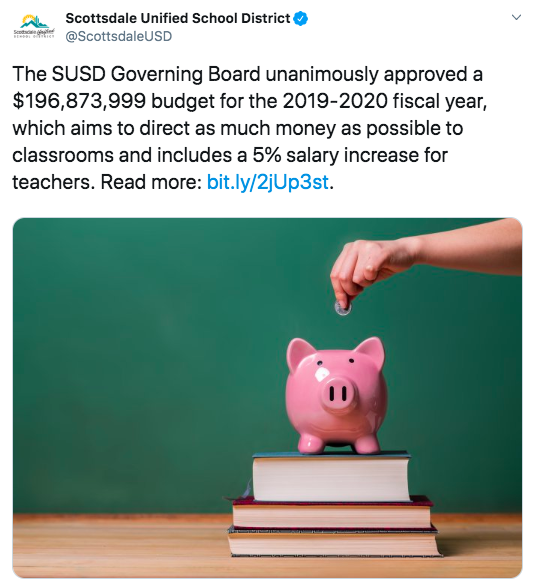 "With the money now promised from the state, school districts across Arizona are working to meet the 20×2020 commitment and increase teacher pay." (8/8/19) 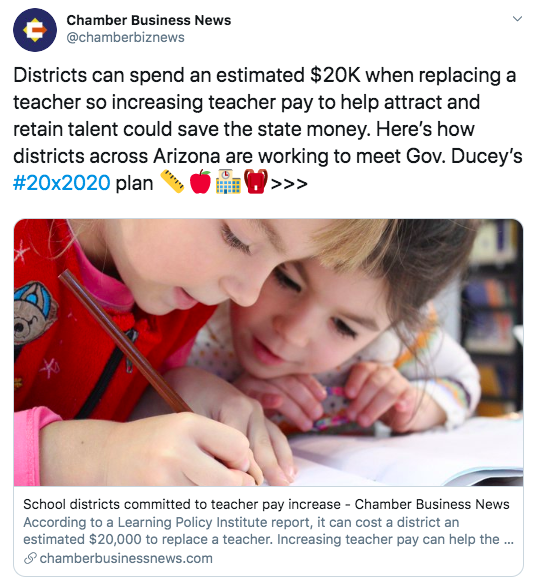