PHOENIX – During his inaugural address, Governor Doug Ducey urged elected officials from both parties to come together to tackle Arizona’s most pressing priorities, including securing our water future, continuing to grow our economy, building on our relationship with Mexico and protecting investments in public education. Governor Ducey also emphasized a continued focus on fiscal responsibility, noting that Arizona currently enjoys the largest projected budget surplus in a decade, and pledging to reject calls to raise taxes.

“Arizona has been a jobs magnet, but it’s time we become a jobs juggernaut -- where if you want to work, you can. Because here we won’t stand in the way of jobs; we welcome them with open arms. And we’re just getting started,” Governor Ducey said during the speech. 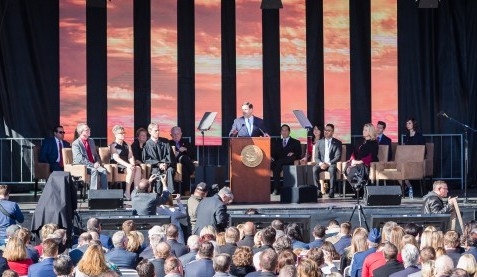 “Today I recommit to be governor for all the people,” Governor Ducey said. “Civility and collaboration will carry us forward. This isn’t Washington, D.C. Here, we know each other. Name-calling and game playing don’t work. Good faith and good will, do.”

With the Governor of Sonora, Mexico, Claudia Pavlovich, also in attendance, Governor Ducey highlighted the continued partnership between Arizona and Sonora.

“Over the last four years, we’ve worked hard to build a relationship that’s founded on trust and mutual respect,” he said. “And today, I’m proud to say we’re more than just neighbors with Sonora - we’re partners, and that partnership is leading to more growth and prosperity for both our states.”

Read the governor’s full remarks below.

I stand here today, with a heart full of gratitude, humility and a strong awareness of the responsibilities Arizonans have once again entrusted in me.

Over the last four years, I’ve seen greatness all over Arizona and most notably, in the heroes in our state: Our state Troopers, our first responders, and the men and women of our Armed Forces, including members of the Arizona National Guard. Thank you all for your service and sacrifice.

Four years ago when I stood before you, our leaders had navigated us through the most challenging economic downturn of our lifetime. Yet, Arizona was still recovering from the devastating effects of the Great Recession. Job growth lagged. Our schools were mired in divisive lawsuits. And some still held onto the worn-out notion that “government knows best,” even when it meant standing in the way of a citizen’s right to earn an honest living.

Today, I’m proud to say, those days are behind us. Arizona is open for business, government has gotten out of the way, the people are benefiting, and it’s going to stay that way.

Now, comes the work ahead.

Arizona has been a jobs magnet, but it’s time we become a jobs juggernaut. Where if you want to work, you can. Because here we won’t stand in the way of jobs; we welcome them with open arms. And we’re just getting started.

Look at any of the really big things we were able to accomplish these last four years and I’m proud to say – “we did it together.” The American Civics Act, new measures to fight the opioid epidemic, eliminating the rape kit backlog, and investing 2.7 billion new dollars and growing into public K-12 education.

Today I recommit to be governor for all the people. Civility and collaboration will carry us forward. This isn’t Washington, D.C. Here, we know each other. Name-calling and game playing don’t work. Good faith and good will, do. Truth is, it’s tough to be disagreeable when you run into each other at church, kids’ games or the grocery store.

That doesn’t mean we don’t have passionate and hard-fought debates at this Capitol. We have, and we will. But we can do so respectfully -- that’s how we’ve operated these last four years, and I have no plans to change my approach. If we start from the premise that everyone who shows up to work here each day cares, and has the best intentions for the people we represent -- so much is possible.

Those “tough times” ahead that the newspapers spoke about in 2014. Today, we’ve cleared many of the obstacles in our way. But that doesn’t mean we get to slow down. Quite the opposite.

With a real momentum going, it’s time to press forward on some of the biggest challenges facing us. Because none of us came here to do little things -- we came here to do the things that matter, big things -- and we can do them together.

Bringing more, qualified teachers into the classroom, and equipping every student with the know-how needed to succeed after graduation;

Holding the line on the inevitable creep of bigger, bloated government -- and instead, making government smarter and more responsive to our citizens;

Protecting public safety, while finding ways to reverse the trend of far too many young men ending up behind bars;

Enforcing our laws; hammering down on drug trafficking and human smuggling;

Recognizing the value of every American citizen, no matter where they came from;

And securing our water future.

Our duty is to leave this state in far better shape than we found it -- and we are well on our way.

These are the tasks before us. And if there’s any question of how Arizonans expect us to solve these problems, I’d say, look around. Taking the oath with me today are Republicans and Democrats – all hired by the same electorate.

When conversations stall, as they sometimes do during difficult discussions, we let history be our guide and the hand that lifts us back up.

The can could not be kicked any further.

But Arizona’s history is not one of missed opportunities or efforts that came up short. Rather we find, that in the darkest times, Arizona’s pioneering spirit shines the brightest.

Democrats and Republicans rose above party labels. They brought skeptical and reluctant stakeholders to the table. And they acted – and they did it with good faith and honest intentions.

For the people in this crowd and many across our state, I don’t have to spell out the parallel circumstances in which we find ourselves today.

It’s simple. Arizona and our neighboring states draw more water from the Colorado River than mother nature puts back. And with a critical shortfall imminent, we cannot kick the can any further.

It’s going to mean rising above self-interest, and doing the right thing. It means taking the action our past and future generations demand.

When we set out to achieve the truly worthwhile goals, we find the relationships we’ve forged really come into play; how we talk about each other; the rhetoric we use.

Nowhere is that more evident than with our number one trading partner times four: Mexico. Over the last four years, we’ve worked hard to build a relationship that’s founded on trust and mutual respect. And today, I’m proud to say we’re more than just neighbors with Sonora - we’re partners, and that partnership is leading to more growth and prosperity for both our states. It’s my honor and please join me in welcoming my friend, Governor of Sonora, Mexico, Claudia Pavlovich.

The growth is evident all around us. Every day, more people are moving here; more jobs are being created; giving us the ability to invest in the areas that matter most, like our public schools and students.

In fact, four years ago we were broke. Today, it’s not by accident-- I stand before you with the largest projected budget surplus in a decade.

Whatever limited new spending we do will be smart and targeted and aimed at helping the people who need it most, so they can access the abundant opportunity that is Arizona.

And to secure that opportunity, we will be rejecting the calls to raise taxes.

Today, we stand on the shoulders of giants with the wind at our back and incredible promise ahead. Let’s not set our sights too low, or be tempted to push today’s problems onto tomorrow’s leaders.

One of the greatest Arizonans had a saying; it was “Country First.” He lived it each and every day, in every word he spoke and every action he took -- from the U.S. Navy to the United States Senate.

John McCain gave us the model for how public servants should carry out their duties – with honesty, integrity, compassion, and above all, a commitment to serving a cause greater than one’s self.

It’s why thousands of Arizonans lined up just a few months ago -- right in this spot -- to pay their respects, and say goodbye.

Let’s work in the mold that he created to make an Arizona he would be proud of.

Let’s look to those who have come before us and served in this same spirit -- those with names like Hayden, Udall, Goldwater, Castro, Pastor, Mofford, O’Connor, Giffords, Kyl and yes, John McCain.

To all of those who have been entrusted with the confidence to serve our great state:

Let’s create opportunity for all Arizonans.

Let’s be bold in doing the things that matter.

Let’s do that work -- the hard work -- and make our state proud.

Thank you, and God Bless.