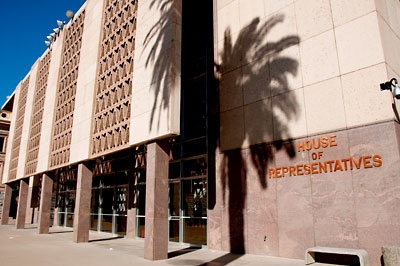 “Somebody Call The Daily Show”

PHOENIX — Arizona will finally own our state Capitol building again, reversing one of the of most infamous budget gimmicks of the Great Recession, paying off debt and saving taxpayers more than $100 million.

Governor Ducey announced in today’s State of the State address that Arizona is regaining ownership of the Arizona State Senate and House Chambers and Executive Tower.

During the speech, he said:

“When I stood here four years ago, we faced a $1 billion deficit. It’s not by accident that today, we’ve got a $1 billion surplus. And breaking news: somebody call The Daily Show -- we even own this building again.”

The buildings housing the Arizona House and Senate chambers were sold by the state in 2009 as a sale/leaseback deal to help generate new revenue during the Great Recession. At the time, the deal netted $1.4 billion in new revenue.

Now with a healthy economy, budget surplus and improved credit worthiness, Arizona is paying off its debt and lowering interest costs, allowing the state to reclaim ownership free and clear of buildings like the State Capitol. Other buildings that the state will regain ownership over include: the Executive Tower; the School of the Deaf and Blind; the Fair Grounds; the Library & Archives; and the Supreme Court.

The refinancing is projected to save $109 million in General Fund dollars in reduced debt payments over the next 10 years.