DCP By The Numbers 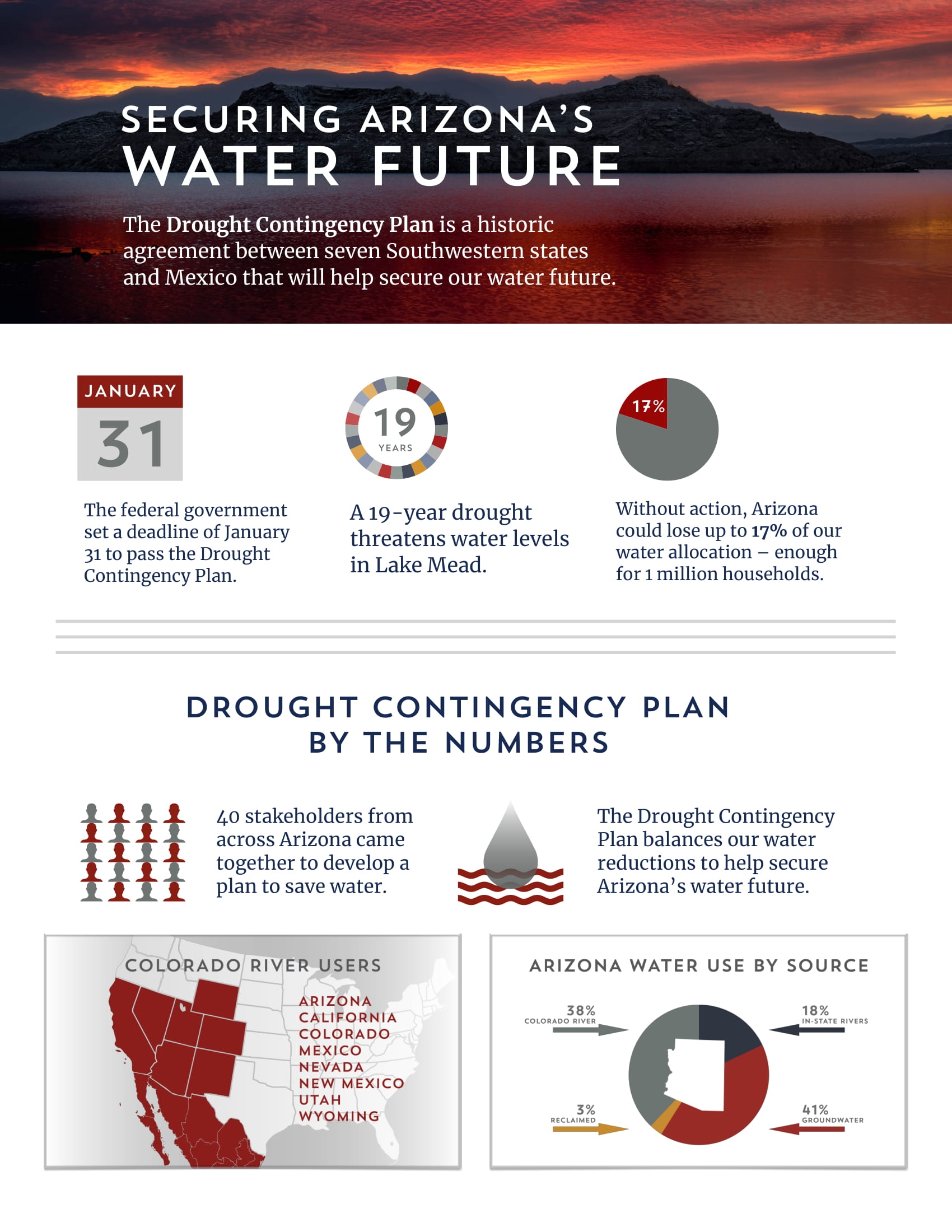 The Problem:
Arizona’s water supply is threatened by a 19-year drought. Facing dwindling water levels in Lake Mead, the federal government has ordered Arizona and its neighboring states to conserve more water in the lake - or face harmful water cuts.

If Lake Mead reaches critically low levels, Arizona could lose access to up to 17 percent of its water allocation, the equivalent of losing a year’s worth of water for one million Arizona households.

Taking Action: The Drought Contingency Plan
Since July 28, 2018, 40 stakeholders representing diverse interests from across Arizona have worked to develop what’s known as the Drought Contingency Plan, or DCP.  These stakeholders included members of both parties and chambers of the Arizona Legislature as well as individuals representing interests such as agriculture, cities, industry, tribal communities, non-profits, and more.

On December 6, 2018, the stakeholders approved a plan that balances water reductions in the state to ensure no one user is taking the brunt and spells out ways that Arizona will contribute to conserving more water in Lake Mead.

How Is The Legislature Involved?
Some components of DCP must be approved by Arizona’s legislature while others involve private agreements between various water users.

Currently, the Legislature is considering parallel bills in the House and Senate that enable DCP to be ratified. One bill authorizes Arizona Department of Water Resources Director Tom Buschatzke to sign-on to the interstate Drought Contingency Plan on behalf of Arizona. The other bill allows for certain water stakeholders within Arizona to make agreements on water usage rights and provides $30 million in Lake Mead conservation, $2 million for ground water conservation, and $9 million for Pinal County agriculture infrastructure projects.

Why is this important now?
The Bureau of Reclamation, the federal agency that manages the storage reservoirs on the Colorado River, set a January 31 deadline for the seven Colorado River basin states to agree to a plan. If the deadline is not met, the Bureau has said it will post a federal notice asking the seven basin states to provide recommendations for a course of action, which would restrict Arizona’s ability to determine its own water future.