Governor Ducey Appoints Fred DuVal To The Arizona Board Of Regents 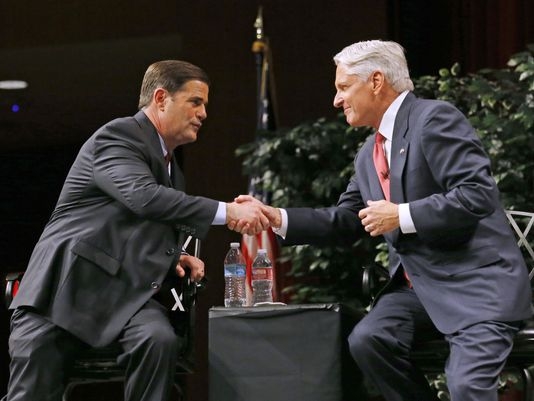 "In Arizona, we know how to work together, across party lines, put aside our differences and get positive things done for the people we serve. Few individuals have a better record and history of doing that than Fred DuVal,” said Governor Ducey. “Fred is a remarkable leader who brings with him immeasurable higher education experience and knowledge through his long-standing involvement with the University of Arizona. As a champion of both business and community leadership, Fred knows first-hand how to work in a collaborative spirit to increase high-quality affordable postsecondary opportunities and prepare students for our state’s 21st-century workforce."

Born and raised in Tucson, Fred attended the University of Arizona, where his father, Dr. Merlin K. DuVal, was the founding Dean of the College of Medicine and the Vice President for Health Sciences. In 1987, the Arizona Health Sciences Center auditorium was named in Dr. DuVal’s honor.

Fred previously served as the Chairman of the Arizona Board of Regents in 2011 and led the campaign to increase postsecondary attainment in our public higher education systems through a delivery model redesign that yielded the highly successful 2+2 pathways programs between Arizona community colleges and public universities.

Fred was the Democratic nominee for Arizona governor in 2014 against then-Treasurer Doug Ducey. In 2017, Governor Ducey credited Fred for presenting the original concept of the Arizona Teachers Academy during a debate in which they were both candidates for governor and applauded him for his energy and advocacy for public education. In his speech, Governor Ducey stated, “the fact is – no political party has a monopoly on good ideas, especially when it comes to education. It was Fred’s good idea that ignited this effort and brought us here today."

“I want to thank Governor Ducey for his spirit of bipartisanship,” Fred DuVal stated. “I look forward to using my previous policy experience as a Regent to make a significant impact on our state’s workforce needs and economic development and to make college more affordable for all students. And as I take on this important role again, I look forward to collaborating with Governor Ducey on the full-scale expansion of the Teachers Academy at our three public universities.”

Fred will fill the seat previously held by Rick Myers, a Tucsonan appointed by former Governor Jan Brewer in 2010.

“I’d also like to express my sincere appreciation to Regent Rick Myers for his years of service,“ said Governor Ducey. “His wealth of knowledge and insight as a businessman and as a community leader was an asset to the Arizona Board of Regents during the most crippling economic downturn of our state’s history. His innovative approach to transformational change led the public university system into a period of unprecedented growth in postsecondary attainment and productivity.”