Arizona is garnering national attention for job gains. While there's always more work to be done, earlier this year, Arizona finally gained back all of the jobs lost during the Great Recession. (Phoenix Business Journal 03/24/16) 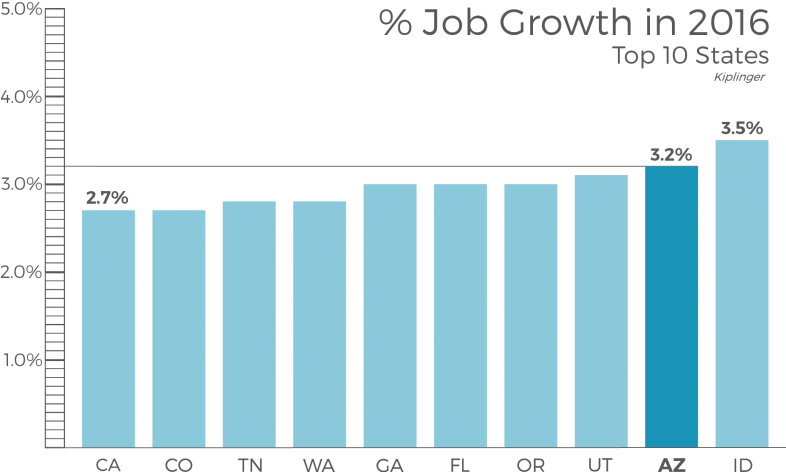 In June, Forbes also recognized the Phoenix-Mesa-Scottsdale area as the “City Winning the Battle for Information Jobs” outside of San Francisco and Silicon Valley. Growth in information employment here was 7.51 percent for 2015 while that workforce grew 39.29 percent from 2010-2015. (Forbes 06/06/16)

Most importantly, these ranking and statistics are accompanied by the arrival of more jobs for Arizonans.

Growth Not Restricted To Maricopa County

George Hammond, director of the Economic and Business Research Center in the Eller College of Management at the University of Arizona recently said "We're (the Tucson area) seeing the strongest growth since before the Great Recession." (Arizona Republic 06/01/16)

In May 2016, Caterpillar announced that it is bringing a regional headquarters along with 600 well-paying jobs to Tucson over five years, including engineering and executive management positions. (Arizona Daily Star 05/03/16)

These announcements of new jobs and investments heading to the area come as Tucson’s annual employment growth rate for February 2016 on a seasonally adjusted basis came in at 2.9 percent – virtually identical to the statewide average of 3.0 percent at the time, and well ahead of the national annual rate of 1.9 percent.  (University of Arizona Eller Economic and Business Research Center 03/25/16)

Add all of this to last year’s news that companies like Comcast (Arizona Republic 05/21/15) and HomeGoods (Arizona Daily Star 04/22/15) would collectively bring approximately 2,000 jobs to the area, and the evidence points to one conclusion – Tucson is among our state’s brightest rising stars.

Outside of the two largest counties there is also good news.