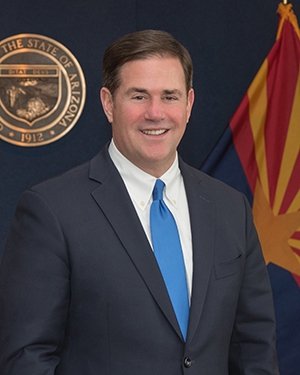 Governor Doug Ducey was elected as Arizona's 23rd governor in 2014 and re-elected in 2018 with more votes than anyone in state history. Upon election, Arizona had a $1 billion deficit and a sluggish economy. Today, Arizona has a record surplus, a balanced budget and a booming economy.

That’s no coincidence. Governor Ducey has eliminated overburdensome regulations, fostered the creation of hundreds of thousands of jobs, and reformed taxes every year he’s been in office—including signing the largest income tax cut in state history.

Throughout his administration, Governor Ducey has prioritized education. Since he took office, Arizona has invested approximately $11.5 billion into K-12 education and brought per-pupil funding to a record high. He has also positioned Arizona as a national leader in school choice and civics education. In 2022, Governor Ducey signed what has become the gold standard in school choice and educational freedom.

Even with record investments and historic tax cuts, Governor Ducey has found a way to ensure Arizona’s insulated from future downturns, adding $1.4 billion to the state’s Rainy Day Fund.

He is a former businessman and CEO of Cold Stone Creamery who began his career at Procter & Gamble and today also serves as Chairman of the Republican Governors Association. He has 3 sons, has been married to his wife Angela for 32 years and resides in Paradise Valley, Arizona.